About 60% of St. John is owned by the National Park, so most of the island is undeveloped. Some of the most picturesque beaches in the Caribbean are located along the island’s north shore. The most spectacular and well-known of these is Trunk Bay, which has been voted one of the “The 20 Most Beautiful Beaches in the World” by Condé Nast Traveler magazine, has received similar recognition from other publications and is rated a Blue Flag beach.

Since the beaches are located on National Park land, they are all open to the public with the exception of Caneel Bay. The remaining coastal land, mostly in the north and in the east, is private property and contains many secluded private villas and cottages. The National Park Service also offers a campground on the island at Cinnamon Bay. 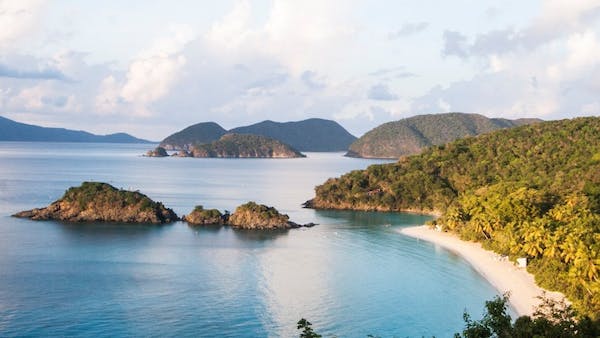 The reefs near St. John’s beaches are also world-famous for their snorkeling. In some areas, such as Trunk Bay and nearby Cinnamon Bay, signs identifying various marine flora and fauna have been placed by the National Park Service among the many offshore coral reefs to assist visitors. There are also sailing charters available that tour the island, as well as tours around the British Virgin Islands. Boats are available from Cruz Bay Watersports and depart from The Westin Resort and Villas, St. John just south of Cruz bay. The beaches on the south side of St. John are mostly pebble and coral beaches, are considerably wilder and are also more remote. Some are only accessible by hiking through natural terrain.