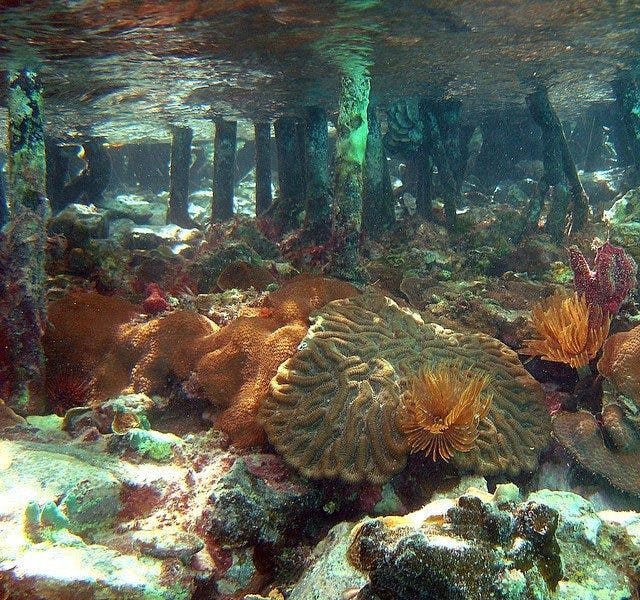 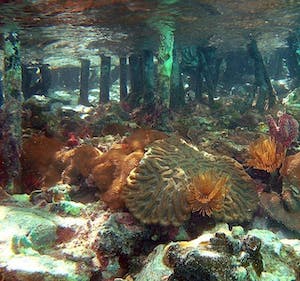 Virgin Islands Coral Reef National Monument encompasses most of St. John, VI and Hassel Island. Created in 2001 by President Clinton, the monument itself is underwater and protects 22 miles of marine habitat and reef in the Virgin Islands National Park and surrounding tropical forests. Nearly 30 of the 45 known coral species exist inside the monument, which is unusual in such a condensed area, and adds to the importance of preserving this 12,708 acres of marine life. 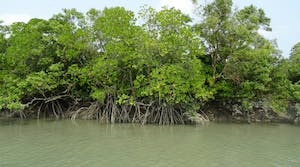 In 2005, the coral reefs in the USVI suffered from coral bleaching, which led to the decline and death of 60% of the ecosystem’s coral population. After this devastation to the reef, scientists worked together to form a research program charged with preserving the area’s reefs and related ecosystems. After more exploration of the Virgin Islands National Park, scientists found many unknown coral reefs at the base of the mangrove trees in Hurricane Hole. It appeared that the mangrove forests along the shore lines were helping to protect the coral reefs from bleaching, among these reefs were many undiscovered species of coral and sponges, the first known to be living inside a mangrove ecosystem.

This area in Hurricane Hole became known as the most diverse coral ecosystem in the Caribbean, as well as the “secret coral garden”. There is no clear rhyme or reason as to what allows these ecosystems to host such a variety of marine life, but because of its diversity, the Hurricane Hole coral reefs have become an important resource in furthering the rehabilitation and preservation of coral reefs as a whole. The Hurricane Hole reefs are believed to have a higher tolerance and resistance to changing water temperature and protection against bleaching because the roots of the mangrove trees themselves act as a filtration system to provide the coral with clear, clean water. Because of this natural phenomenon scientists are now able to study and test reefs that are extremely vulnerable against those that are extremely protected.

The name Hurricane Hole is only suiting for the home of this particular reef because it is meant to describe the protection provided by the mangrove forests against a hurricane itself. Although boats are no longer permitted to anchor in Hurricane Hole now that it is protected as a national monument, the mangroves continue to provide shelter and relief to the precious coral reefs and the organisms they house. 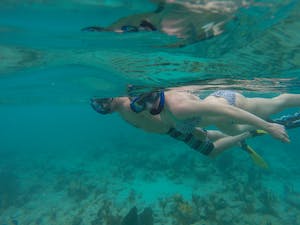 Observe the ecosystem without disturbing it! This monument has a lot of secrets to tell and discoveries to reveal, which you might choose to explore on a snorkeling, paddle boarding, or kayak trip. Help preserve this area by keeping your hands to yourself (that means organisms and wildlife), and looking without touching, as well as traveling without stirring up too much sediment. When snorkeling it is best to go without flippers in order to not disturb the ecosystem. Don’t remove rocks or anything else on the seabed in this area, because it is most likely part of a creature’s habitat and home.

Don’t tie into the mangrove trunks or roots. Before this area was established as a national monument, it was common for boaters to tie their boats to the seemingly sturdy mangrove trunks and roots. After years of doing this, scientists have seen a lot of unnecessary wear and deterioration of the trees. It is also against the law to anchor in the monument. Access Hurricane Bay from the beach or in designated docking areas! 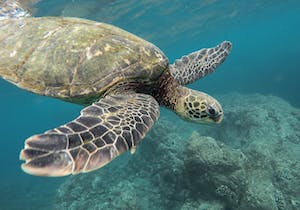 As part of this important ecosystem, the presidential motion to make this area a national monument was not just to protect the coral reefs but the species that nest, breed, and call it home as well. While exploring the beauty of the Virgin Islands Coral Reef National Monument you might also encounter a large variety of threatened and endangered sea animals such as dolphins, humpback whales, hawksbill, leatherback and green sea turtles, 25 species of seabirds and hundreds of different reef fish and crustaceans.

A large variety of organisms are also on display at the monument, from 30 different species of coral, a diverse group of sea sponges, algae and sea grass.

How Do I Get There?

From Cruz Bay, take centerline road towards Coral Bay. Continue forward past Skinny Legs and Estate Zootenval. Shortly after you pass mile marker 10 and the National Park sign, you can access the water through the mangrove trees.

You can also access the Coral Reef National Monument by boat, contact Cruz Bay Watersports today. We can plan everything for your private excursion on the water. Our expert staff and crew will customize the perfect itinerary for your unique charter experience.