About the USVI
About St. John 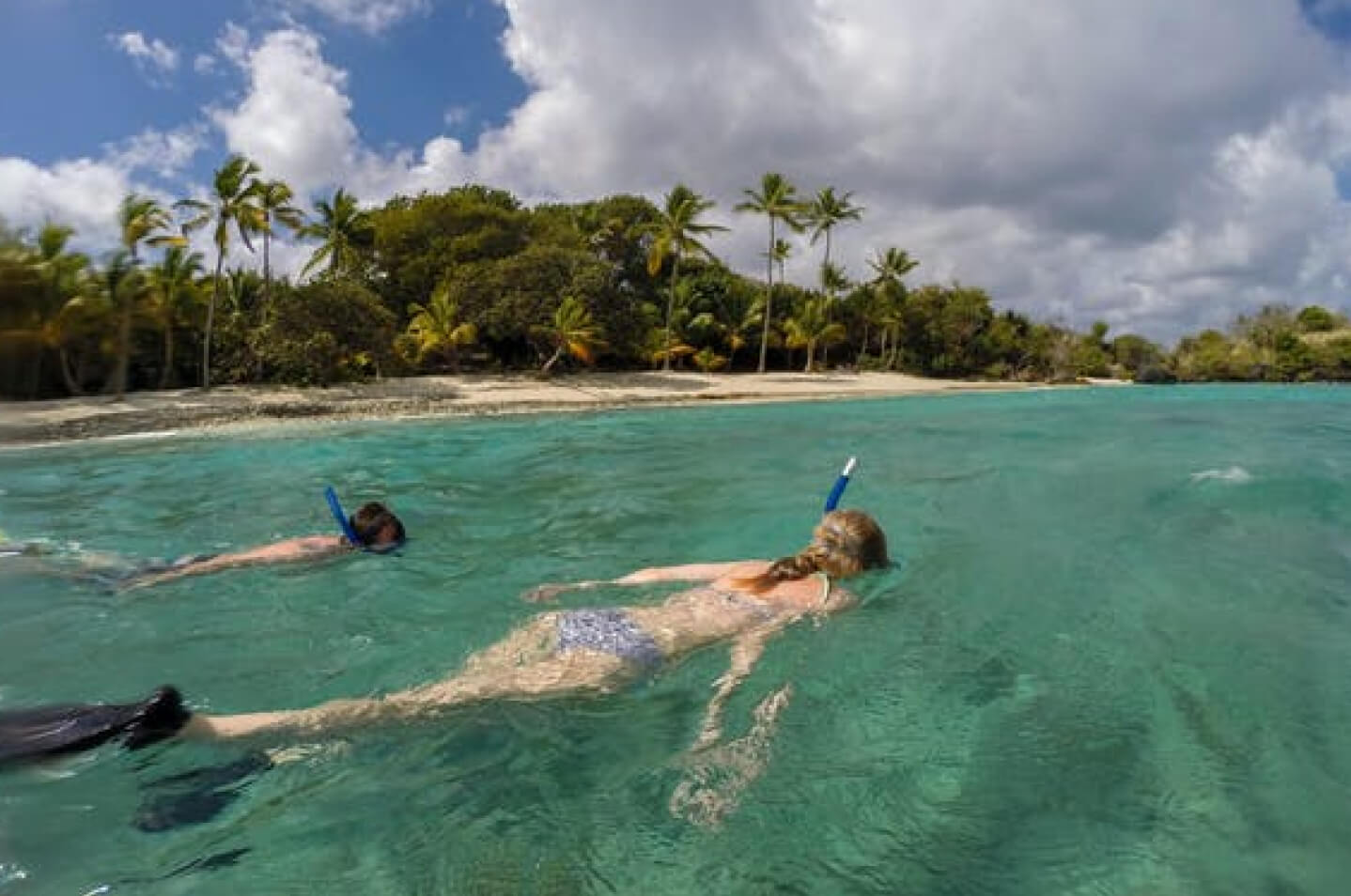 Welcome to St. John! We are the smallest of the three US Virgin Islands, measuring approximately five miles wide by nine miles long, and 1,300 ft. high. Two thirds of the island is designated as a US National Park, giving it an unspoiled beauty and unique character, and making it the crown jewel of the Virgin Islands. We have world-class beaches, water sports, nature trail hikes, cultural demonstrations, duty-free shopping, and fine dining.

St. John has a distinctive atmosphere, an air that combines a solid West Indian tradition with a more contemporary and cosmopolitan attitude. This combination of worlds is a direct product of its status as a US territory. Here, one can indulge in the pleasures of the islands while still enjoying the convenience and security of the United States. This unique quality has made St. John a favorite hideaway for artists and other escapees from the mainland as well as vacationers seeking a quietly exotic yet comfortably familiar getaway.

St. John is a tropical environment and shifts between excellent and outstanding, with temperatures ranging from 68 to 85 degrees F in the winter months and 78 to 95 degrees F in the summer months. The trade winds bring in an occasional shower, which is usually very short-lived (five to 15 minutes), and then the sun pops back out!

We use the American dollar here. Most establishments also accept most major credit cards and traveler’s checks. If using a credit card, ask before shopping or dining.

The official language is English, but some Spanish and West Indian “patois” may be heard.

All persons traveling to and from the Caribbean are required to have a passport for re-entry into the US. Birth certificates with raised seals are no longer an acceptable form of identification.

We are on Atlantic Standard Time and don’t change for daylight saving time. In the summer we are the same as Eastern Standard and in the winter we are one hour ahead of Eastern Daylight Savings Time.

The power is 110 volts, the same as in the States.

Are available in Cruz Bay and at all the hotels and resorts. Taxis are on standby at most beaches until late afternoon. Rates are posted and all drivers are friendly, courteous, and trustworthy.

There is no airport on St. John. Everyone flies into the Cyril E. King Airport on St. Thomas and catches a taxi to the St. John ferry dock in Red Hook. From there, it is only a 20-minute ferry ride to Cruz Bay.

St. John has a well-staffed hospital, The Myrah Keating Smith Clinic, as well as several private doctors, dentists, and a pharmacy.

We drive on the left side of the road here, and have many steep and winding roads.

Ferries are available between Cruz Bay and Red Hook every day. This is a short 20-minute ride. For current pricing and schedules please check with Transportation Services or Varlack Ventures. There is also ferry service to several of the British Virgin Islands. Schedules and fares vary. Please check with Inter Island Boat Services.

A History of
St. John

Christopher Columbus is credited with being the first European to see the Virgin Islands during his second voyage to the New World in 1493. He named the island group “Once Mil Virgenes”, or Eleven Thousand Virgins, in honor of the feast day of Saint Ursula and the 11,000 virgins who were martyred with her.

The Danish West India and Guinea Company represented the first Europeans to settle the island in 1718. They are also credited with naming the island St. John (Danish: Sankt Jan). The Danish crown took full control of the colony in 1754, along with St. Thomas and St. Croix. Sugar plantations, such as the famous Annaberg Sugar Plantation, were established in great numbers on St. John because of the intense heat and fertile terrain, which provided ideal growing conditions. The establishment of sugar plantations also led to the importation of more slaves from Africa. St. John was the site of one of the first significant slave rebellions in the New World in 1733, when enslaved Akwamu rebels from the Gold Coast took over the island for six months.

The Danish were able to defeat the enslaved Africans with help from the French in Martinique. The slaves, instead of allowing themselves to be recaptured,  shot themselves or flung themselves from Mary’s Point before the French forces could re-capture them. It is estimated that by 1775, slaves outnumbered the Danish settlers by a ratio of 5:1. The indigenous Caribs and Arawaks were also used as slave labor, to the point of wiping out their entire population. Slavery was finally abolished in St. John on July 3, 1848.

In 1917, the United States purchased the U.S. Virgin Islands for $25 million from the Danish government in order to establish a naval base whose purpose was to prevent German expansion in the Western Hemisphere. They also agreed to recognize Denmark’s claim to Greenland, which they had previously disputed.

In 1956, Laurence Rockefeller donated most of the land he had acquired on the island to the United States’ National Park Service, under the condition that it must be protected from future development. The remaining portion, the Caneel Bay Resort, continues to operate on a lease arrangement while the park owns the actual land. The Virgin Islands National Park borders encompass 75% of the island, but various in-holdings within the park boundary (e.g., Peter Bay, Maho Bay) reduce the actual land the park owns to 60%. However, much of the island’s waters, coral reefs and shoreline are protected via their inclusion in the park. This protection was expanded in 2001, when the Virgin Islands Coral Reef National Monument was created.